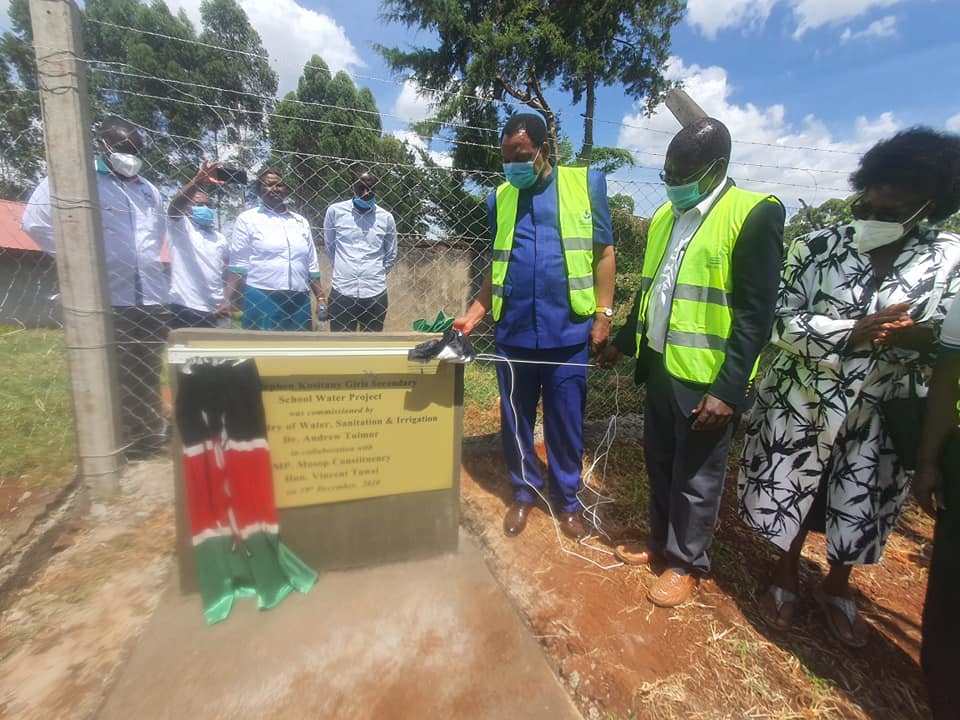 Posted at 06:31h in News by Daniel Owino 0 Comments

The project was commissioned on the Saturday 19th December, 2020 by the Acting Chief Executive Officer for Lake Victoria North Water Works Development Agency Daniel Bundotich on who represented the CAS Ministry of Water, Sanitation and Irrigation Dr. Andrew Tiumur. Present during the function was the area constituency Member of the National Assembly Hon.Vincent Tuwei, CEC  in Charge of Water, Nandi County, the Principal St. Stephen Kositany Secondary School and a host of local leaders.

The t. Stephen Kositany Secondary School Water Project was constructed by LVNWWDA at a cost of KShs. 2.9M. It is one of the Projects implemented by the Agency under the Water for Schools Programme currently under implementation by the Ministry of Water, Sanitation and Irrigation throughout the country through its various Agencies. The St. Stephen Kositany Secondary School Water Project serves about 1,020 people within the school and the neighboring Community. The project involved Borehole equipping, construction of the distribution lines and construction of the Solar pumping system which powers the water supply.

Speaking during the ceremony, Mr. Bundotich assured the community of continued support to ensure universal access to clean and affordable water throughout the Agency’s coverage area. He promised to partner with the County government of Nandi to ensure the optimal utilization of the completed projects to access more and more people.

Bundotich also announced that the Lake Victoria North Water Works Development Agency  is in the final stages  to rolling  out the biggest project ever to be done in Nandi County; the Keben Dam Water Supply project. This is a  projected is expected to cost over Kshs. 8 Billion and will serve over half of the Nandi County; both urban and rural areas.